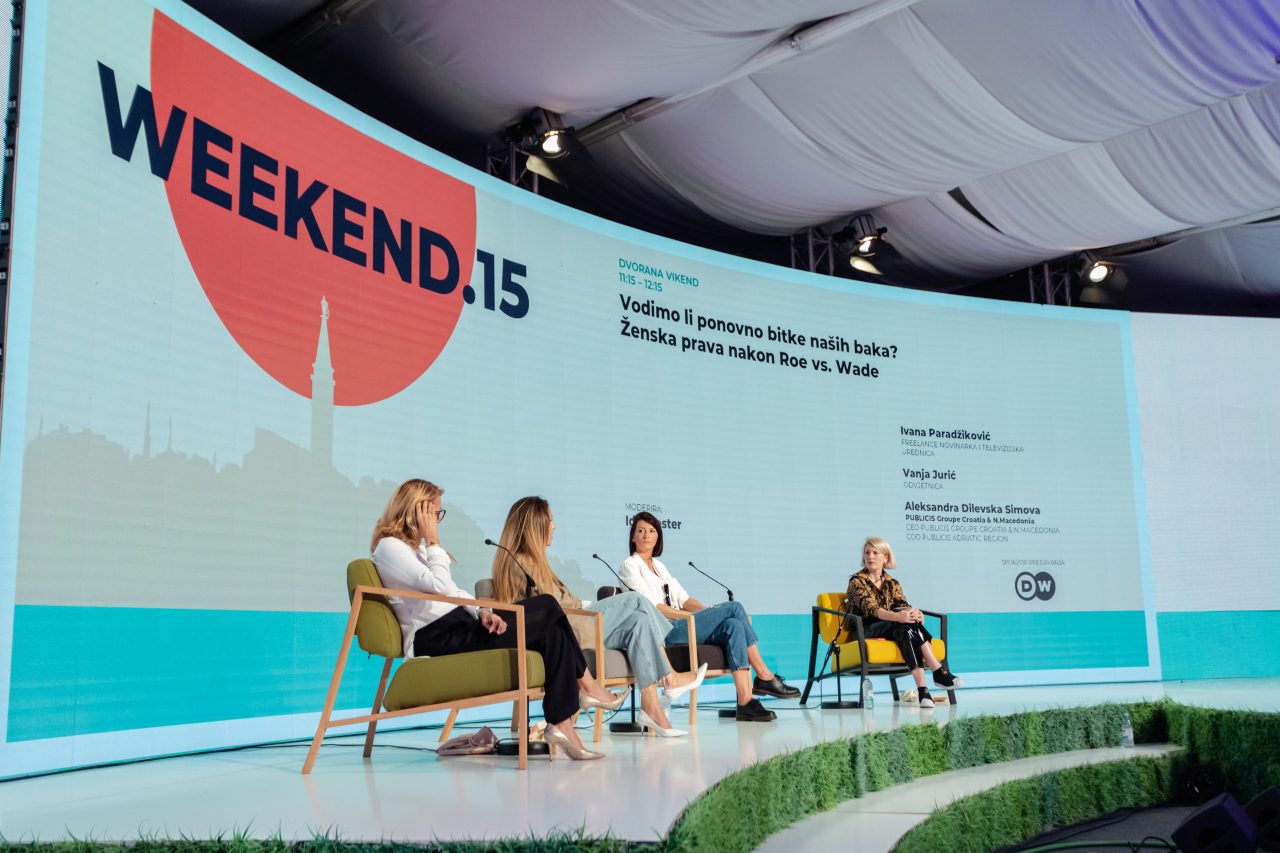 The first morning lecture on the third day of the Weekend Media Festival was mostly attended by women. The panel entitled “Are we fighting the same battles as our grandmothers? Women’s Rights After Roe vs. Wade” was moderated by Ida Prester, who bravely opened topics that are not usual for the Weekend – feticide and femicide with an unexpected photo in the background. Because it’s not all about Instagram, cleavage and beautiful photos. Have women in Croatia been taught to be quiet? How much can we give each other a helping hand? Who will watch our backs? Lawyer Vanja Jurić, journalist and television editor Ivana Paradžiković, and CEO at Publicis Groupe Croatia & N.Macedonia Aleksandra Dilevska Simova shared their experiences, stories and advice with the audience.

When the 50-year-old Roe vs. Wade was dismissed by the US Supreme Court a few months ago, women around the world rightly wondered if a new fight for long-won women’s rights would follow. The wave of conservatism is also pouring into our region, which was most evident in the case of Mirela Čavajda, which shook the Croatian public, was covered in the media for a long time and brought about real change. Ivana Paradžiković explained what the first few days were like after Mirela learned the diagnosis: “She called me when she found out about the diagnosis. I told her I was there for her, and she spoke to Vanja at the same time. The most beautiful moment of that whole terrible event was when all three of us met in Vanja’s office. When women have each other’s backs, anything is possible.” Mirela’s lawyer Vanja Jurić followed up on that: “The system is organized under the influence of different structures, and doctors are discouraged from performing pregnancy terminations by having conditions placed on their further career development. Privately and quietly, all the doctors supported us, but they said that their hands were tied. All this was due to the very significant influence of conservative power structures. In the end, the second-instance commission approved the termination of the pregnancy and said it was legal. However, the hospitals said that they did not have the professional capacity to carry out the procedure, and the Petrova Hospital only offered a premature birth. The question of the legality of terminating a pregnancy under these conditions will no longer be raised, because now the HZZO (Croatian Health Insurance Fund) will pay for women to have their pregnancies terminated in Slovenia. Furthermore, a department for the termination of pregnancies has been opened at the ‘Sveti Duh’ Clinical Hospital.”

We must not relax

Can that step forward be taken back again tomorrow? What is the level of protection for women in the Balkans? Is the situation improving or are we regressing? As we saw with Roe vs. Wade, this is a fight that must not stop and we have to be aware of that. The situation can get out of hand very easily if we start pretending that everything is fine. Nothing is set in stone and we must not relax. Civil society organizations are extremely important and they act as watchdogs. When we mention violence against women, the situation is also terrifying and the rate of femicide is higher than ever. It is important to be loud and united, because that is the only way we can solve each individual case. Although we may have been raised to be quiet, we should scream at the top of our lungs and show that we mean business when the situation calls for it. Not a single country in the EU has any legislation related to femicide. But introducing it into law is not the solution to the problem – but rather public recognition. We must recognize this and very systematically educate citizens and children from an early age about equality issues.

Buddy-buddy relationship between women in business

“Women should be present in prominent positions in society so that problems can be solved. I am in favour of quotas but some women say we have to deserve it. This is negative selection. Throughout my life, I have always met men who respect women as woman and as business partners. But reaching certain benchmarks in the business world require a concerted effort, regardless of gender,” said Aleksandra Dilevska Simova. “When most women join the board, they feel privileged, they feel equal to men. This has been historically conditioned. Statistics show that when a man joins the board they will sooner bring another man onboard than a woman will bring another woman.”

How much can we give each other a helping hand, not only when it comes to violence, but in the corporate world too? Hoping that Ida’s question would not remain rhetorical, the panel concluded with – GIRL POWER! And guys, give us support!