DAB+ Radio: The new face of radio, available everywhere and to everyone! 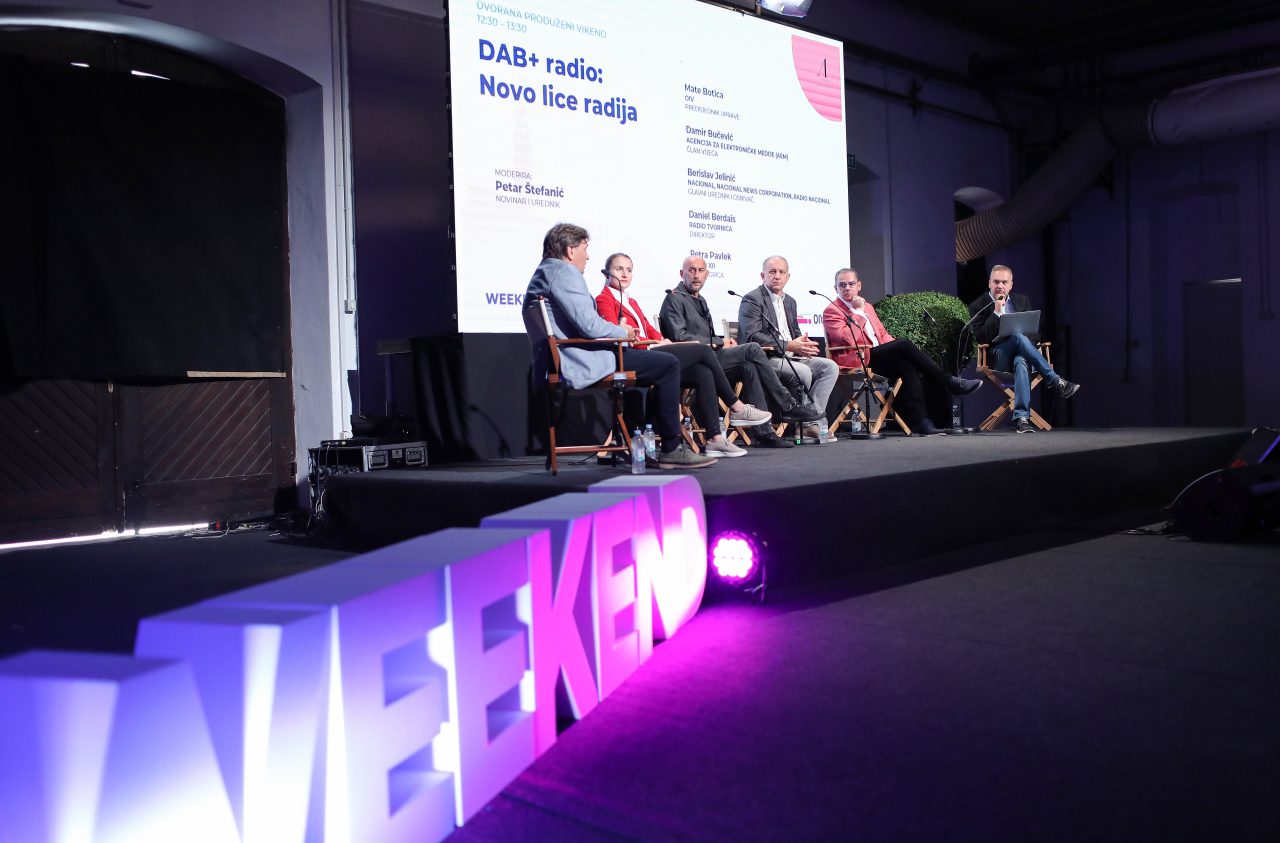 Radio, the older brother of television, is a ubiquitous medium whose future is unquestionable. The new digital radio era, which began with DAB+ technology, offers all current and future radio broadcasters the opportunity to take an additional step towards listeners. This was the unanimous conclusion of the panel entitled “DAB+ Radio: The new face of radio”, held as part of the Weekend Media Festival.

All panelists, Mate Botica, CEO at Transmitters and Communications Ltd. (OIV); Damir Bučević, member of the council of the Agency for Electronic Media (AEM); Berislav Jelinić, editor-in-chief of Nacional and founder of Nacional News Corporation, i.e. Radio Nacional; Daniel Berdais, program director at Radio Tvornica, and Petra Pavlek, the director of ‘Radio 101’, see DAB+ as a new chance to unify the radio industry in Croatia. “The time ahead is an opportunity for everyone in Croatia who is engaged in radio to think about what and how to proceed. This is an ideal opportunity to unify the radio industry and make a joint move towards the listeners,” said Damir Bučević on the panel in front of the Council for Electronic Media. At the same time, he once again reminded that DAB+, an absolutely free technology, is available to everyone, regardless of the internet.

“The new DAB+ digital radio technology is an ideal opportunity for all creatives to offer the best they can to a market hungry for new content,” stressed OIV CEO Mate Botica. He added that at the moment Croatia still lags behind European countries in the development of digital radio technology, but also expressed the hope that by the end of this year they would still be able to do everything they have planned. Namely, the new radio signal is currently within reach of 90% of the population, and 76% of the national highway system. By the end of 2022, with the commissioning of new transmitters, coverage will be 96% in the population and on highways, which is the European and world standard, he concluded.

“DAB+ technology was a logical step forward into a new sphere,” emphasized Berislav Jelinić, editor-in-chief of Nacional and founder of Radio Nacional, the first national concessionaire on the new digital platform, which, he emphasized, wants to offer listeners the best and most relevant content. Along with Jelinić, Daniel Berdais from Radio Tvornica, made sure that everything was not made to sound too positive. He warned that there are too many radio concessionaires in Croatia, and that radio needs a complete reconstruction, primarily in terms of content. He also added that the lack of a national media strategy, which would define the direction of DAB+ technology and radio broadcasters in general, is obvious.

The director of Radio 101, Petra Pavlek, emphasized that radio listeners, as well as the population in general, are not sufficiently familiar with digital radio technology, which, after all, was the common conclusion of all panelists. Therefore, a national campaign is being prepared to promote the DAB+ format and technology in general, which will start soon. Let’s remind you once again that through DAB+ digital radio, listeners receive a radio signal without interference, the possibility of a larger and simpler choice of programs with clear sound and additional text, graphics and video data related to audio content such as album covers, comments along with sports broadcasts, song and artist information, electronic program guide, etc. All this without internet costs and completely free for all users.