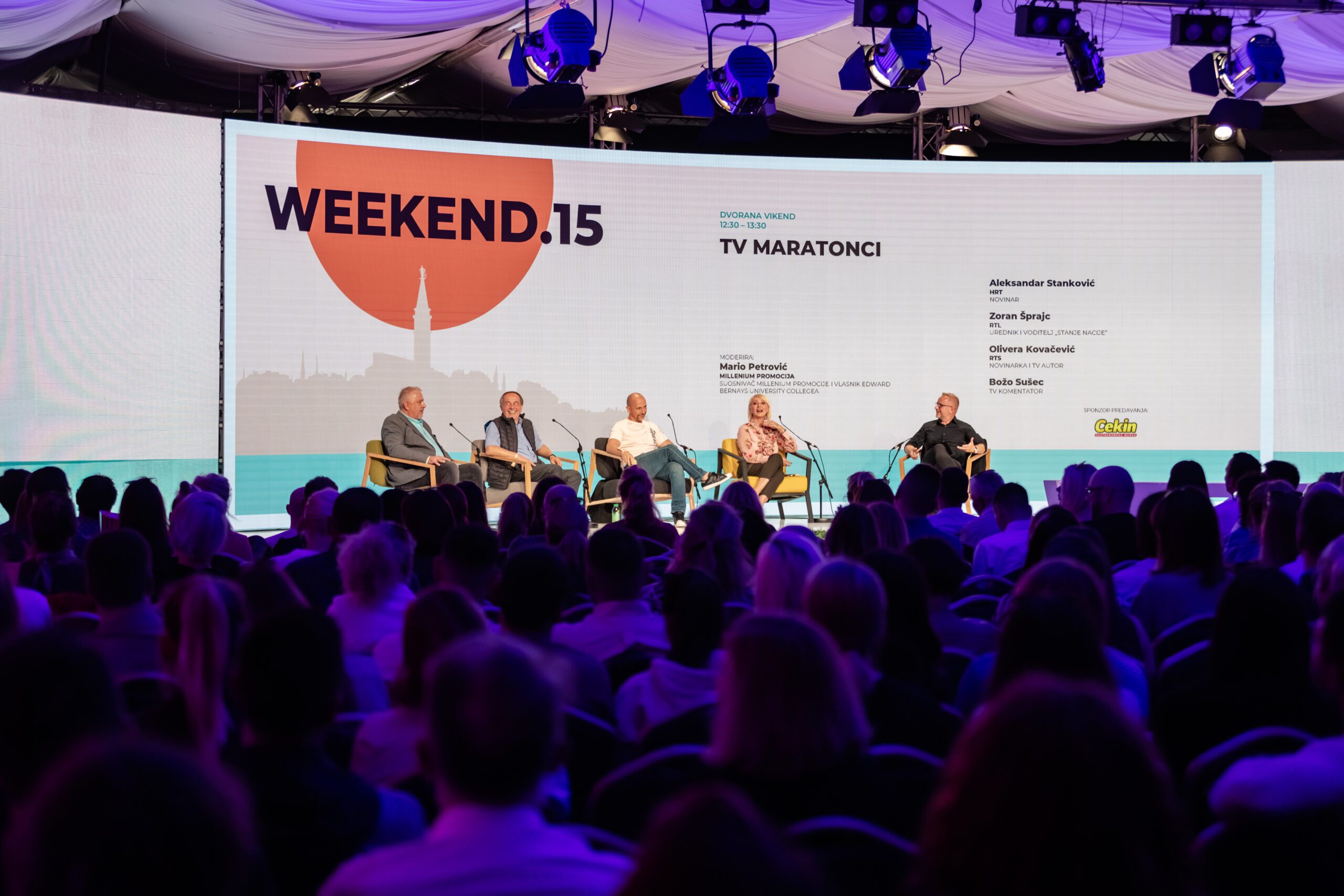 In an age when media attention is reduced to the hundred-metre dash, they have been running marathons for years. Despite the fast forward lifestyle, Zoran Šprajc (RTL Croatia), Aleksandar Stanković (HRT), Olivera Kovačević (RTS, Serbia) and Božo Sušec (TV commentator) are still part of our everyday lives. These hardened stars of the small screen and some of the most recognizable television personalities on the “TV Longevity” panel explained how and why they survived in the turbulent television universe. And together with moderator Marija Petrović, co-founder of Millenium promocije and owner of Edward Bernays University College, they revealed the secret to their longevity. The panel, sponsored by Vindija (Cekin), was appropriately opened with a video dedicated to the recently deceased legendary Croatian journalist from Nova TV, Mislav Bago, who was supposed to be one of the panelists.

“Mislav Bago was the soul of the Weekend Media Festival for the past 15 years,” said Mario Petrović at the start of the panel. Despite the sombre beginning, the popular faces of the small screen soon entered their standard television personalities that viewers know so well. The speakers were asked if journalism ends at the age of 65, and they all agreed that retirement depends on the person and the media company where you work. As the true bard of Croatian sports journalism, Božo Sušec was the first to comment on the topic. “I think it is one of the stupidest things in our business. No two 65-year-olds are alike. There are 65-year-olds who have reached that age and feel as if they are 90, and there are also people of that age who are full of vigour and energy. We mustn’t generalize,” he concluded. Zoran Šprajc continued by saying that there are differences between private and public television networks, but people age equally in both of them. “In the public sector, you have to retire at 65, and then they pull you back in to work part-time, it’s all nonsense,” he concluded.

“In this job, you have to love yourself and be somewhat self-centred in order to show yourself to the nation for an hour every Sunday,” said Aleksandar Stanković on his career. “Sometimes I feel like giving up and saying ‘enough is enough’. But most of the time the guests keep me going, since as many as 70% of them are appearing on my show for the first time. If it wasn’t for them, I would have left,” concluded Stanković. Olivera Kovačević took part in the conversation about her career path, pointing out that she worked at four different television stations and proudly concluded that, “if I haven’t earned a benefited seniority, no one has”. And when asked where it was easier for her, she pointed out without reservation – “where the editor is inexperienced!”.

Television will survive but only in cooperation with modern technology, this, at least, is clear to these TV legends. “TV news is a dying business, but it will only die when the audience dies. Today, there are other platforms on which to broadcast the news. People recognize us on other formats too and kids have started watching our shows. Personally, I’m trying to create a new television audience through social media. We must become aware that reading the news at 7 p.m. will eventually die out,” said Zoran Šprajc as he reflected on the future of television.

“Regardless of orientation and pressure, I think that TV news will always be watched. As long as there are people, there will be news. As long as there is a world, there will be interesting things,” said Olivera Kovačević; while Aleksandar Stanković summed it all up by saying that “talk shows will survive if they are hosted by people who the viewers find interesting”.

Everyone agreed on one thing – television will not die out, but it will be watched in a different way, thanks to the development of technology and the arrival of younger generations. The panelists also warned about the lost credibility of television, which is why there is an urgent need to help young people find their way through the pile of fake news by providing them with quality and verified journalism.